Jigging and Reeling Through Uncertain Times

Together with their instructor, the students of De Barra Academy of Irish Dance are still dancing and staying connected through the complexities of COVID-19.

Training as a student of Irish Dance is challenging in the best of times. During a pandemic and under the resulting government prohibitions on in-person gatherings and social interaction, however, training requires all sorts of additional problem-solving and flexible thinking—along with a reliable internet connection.

This summer, the students of Manhattan Beach’s De Barra Academy of Irish Dance, their parents, and their instructor—academy founder and owner Tara Barry-Phelan—invited me to watch a couple of Zoom-based dance lessons and ask questions about their art and how they practice it in the strange circumstances created by the spread of the novel coronavirus. I gratefully accepted the invitation, and was inspired by the dedication, adaptability, and positive energy displayed by students and teacher alike.

For the uninitiated, traditional Irish Dance is characterized by rapid, complex footwork, mainly performed on the balls of the feet while maintaining a rigid upper body with arms held straight down by one’s sides. The choreography is closely tied to such traditional Irish dance music as jigs, hornpipes, slip jigs, and reels, whose histories go back hundreds of years.

Two types of shoes are worn by the dancers: hard shoes, which are heavy and include toe and heel pieces made of fiberglass or similar material to create loud, percussive sounds during performance; and soft shoes, also called “ghillies,” which are made of leather and are similar in style to ballet slippers. The art form is open to both girls and boys.

While traditional Irish Dance as it exists now dates back to the 18th century in Ireland, with some ancient Celtic and Druid influences still present, it was popularized here in the United States and elsewhere in the 1990s by the blockbuster stage show Riverdance, of which De Barra Academy’s owner and instructor, Tara, was a part.

“I joined the cast of Riverdance in 1995, at age 17,” she says of the immensely popular show created by and starring Michael Flatley, “and I toured with them for eight years, until 2003.” In 1999 Riverdance took Tara, born and raised in County Cork, Ireland, all around the United States, and she eventually settled in Southern California with her husband, whom she met on tour in 2002. (The pair now have three daughters, and yes: all three are all Irish dancers!)

In 2016 Tara earned her TCRG teaching certification and opened her dance school in the South Bay. She teaches students aged three years through adults, at all skill levels, including twins Amelia and Elena from El Segundo, and has had four students qualify for the World Championships competition in the past two years. 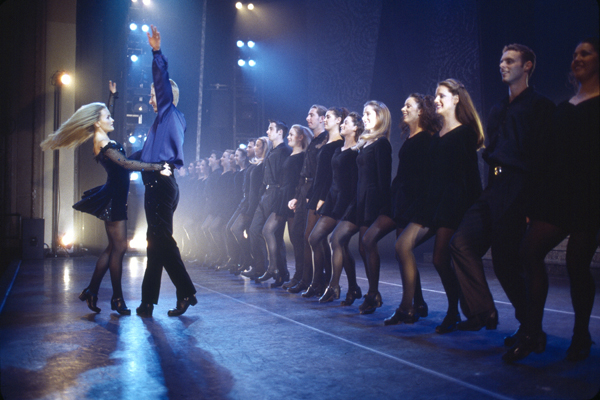 ...and then, the novel coronavirus appeared in the United States earlier this year, infecting millions, taking the lives of more than 150,000, and negatively affecting businesses, particularly small ones, across the country. Tara, while grateful for her own good health and that of her students, had to rethink her in-person model of dance instruction and how to keep her students connected while closing her studio to the usual full-group classes. “We started up virtual Zoom classes in late February and early March,” Tara explains, and it wasn’t a perfectly smooth transition, at first. “Some of the kids really hated it, to be honest,” she admits. “They were anxious and stressed on camera. They were no longer meeting in a neutral studio space, and that was hard.” The De Barra community persisted, though, and eventually the students became acclimated to that virtual environment, Tara says. What’s more, the on-screen face-to-face Zoom dynamic actually, with time, afforded an unexpected intimacy between teacher and students that surprised and delighted Tara. “Through Zoom I’ve actually gotten to know the kids better,” she says. “I am getting to know each child individually, and I feel even more empathy for them this way.”

And, indeed, the Zoom classes and dance-camp days I sat in on, as a guest, were populated on-screen by several smiley, happy-looking dancers, who related to each other warmly and comfortably, as family members might. They occasionally stopped to chat with me and were open about their love of Irish dance and the music, which student Kenza, for instance, said transports her to green, flower-filled Irish meadows in her mind. Several students spoke of the kinship they feel with each other and their teacher, Tara. All seemed happy to be there.

Some classes had each student dialing in from home, dancing in bedrooms and living rooms (with an occasional furry, four-footed friend wandering into frame), their smartphone cameras positioned so that their legs and feet were always visible. During these sessions I had the privilege of watching students Amelia and Elena (from El Segundo); Jo and Reeve (Tara’s twin daughters) and their younger sister, Freya; sisters Erin and Aoife; sisters Carlyn, Aslynn, and Shayne; Colleen; Harper; Emmy; Mimi; and Kyle (ranked third in the region), and sisters Sierra and Aspen. Other Zoom sessions included Tara and a small number of students dialing-in from Tara’s studio, wearing masks and keeping six or more feet of distance between themselves, the studio door open to promote fresh air flow, with the remaining students dialing-in from home. When Tara and some students were participating from the studio, Tara would angle her smartphone toward the large studio mirror to enhance visibility of the dancers. Sometimes she’d play the dancers’ music herself, broadcasting it out via her smartphone microphone to the remote dancers’ individual devices; other times she’d ask the dancers to play the music at their remote locations on YouTube. From my computer screen, I was able to watch the kids spin, reel, and jig to such traditional tunes as “King of the Fairies” and “The Storyteller.” They also performed energetic choreography from Riverdance that left me breathless.

I was struck by the resourcefulness and positive attitudes all around. These were not typical in-person dance classes, of course, but they were dance classes nonetheless, and the students and their instructor were doggedly and cheerfully making it work. They all seemed to be enjoying themselves.

One De Barra parent, Jen Rementer, mother of students Kiki and North, describes remote dance class this way: “Overnight our living room became the dance room. While not exactly the same as in-person classes, my kids still have access to doing what they love, staying connected with their friends and their dance community.”

Although the status of the usual in-person competitions Tara’s students participate in, such as Oireachtas, a qualifier for the World Championships normally held around Thanksgiving, is uncertain, Tara says she is “very hopeful” for future opportunities for De Barra’s students to travel and compete again. “For now I’m just taking it day by day,” she says.

De Barra Academy of Irish Dance is located at 3625 N. Sepulveda Blvd. in Manhattan Beach. The studio shares space with Fifth Row Center Performing Arts, at which Tara also teaches. Find Tara and her students online at debarrairishdance.com and on Instagram at @debarrairishdance.

This story appears in the September 2020 issue of The El Segundo Scene.

Back to School: 3 Screen Solutions for Your Kids' Health